Splashing in The Shallows... 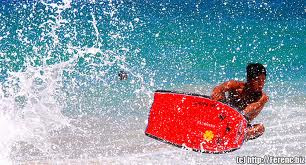 How often have you found yourself on a website that you never intended to visit? How many times have you, in the middle of work, opened an email to follow a link to Youtube and started watching videos, forgetting what you were doing originally? How many lists and tasks have we set aside for tweets, texts and updates?

Our minds are stranded midstream in the information rapids – stuck amidst endlessly interesting content and the many technologies that drive us towards consuming them.

So what’s new about this news, you ask? Well, for the first time ever, the human mind has had to cope with so much of sensory input.

Not only do we conjure up an amazing variety of content, but we’ve also have multiplied the channels to access them (through TV/radio/e-books/ magazines/online/phone/iPlayers). Nicholas Carr in his well-researched book, “The Shallows” makes a forceful argument that this combination results in our neurons rewiring themselves into “hyperlink” mode, preferring to hop, skip, jump and skim over content and devices rather than to rest, think or reflect.

How does this affect us? Because while we gain by developing better reflexes, faster and wider access to information, we also may be losing something.

Baroness Susan Greenfield, a renowned scientist, in her book, "ID: The Quest for Identity in the 21st Century" believes that “the strongly visual, literal world of the screen" could affect our ability to develop the imagination and form the kind of abstract concepts that have hitherto come from first hearing stories, then reading oneself. And this raises the question as to whether “continued interaction with a fast-paced, sensory-laden, multimedia environment predisposes a brain to shorter attention spans”.

Why does it matter? The deluge of input that one’s mind receives floods it and takes up so much of ‘processing space’ that the capacity to ponder, decide and produce output may be vastly diminished.

Matt Richtel of The NY Times details the story of Kord Campbell, who becomes a test-case of the super-connected human... a being almost plugged into the info-matrix. This cyber-man sleeps with his computer, has lost count of the gadgets at his home, cannot turn off his info-stream even when on holiday and has passed on his cyber-traits to his kids. There’s tweets, there’s FB updates, there’s breaking news, there’s IMs... a constant drip of heady distractions that endlessly stimulate his brain.

The Loss Of Wonder, Imagination and all that jazz. Not surprisingly, in this brave new world of links, vids, tweets and texts, the canaries of the human race, the ones who’ve felt the air lightening and their juices slipping away have been the creatives - the writers, the thinkers and the philosophers among us... consider:

Even champions of Web 2.0, people who’ve actively benefited from the world of social media and internet have stopped to wonder at the side-effects...

It is tempting to dismiss these as usual rants from the fringes of our society, but consider the near-unanimous consensus among experts here of the need to manage better, if not abstain from, the digital diet that we seem to be on. Even members of the managerial class, the usual promoters of “productivity and three things at a time & faster”, have been taken aback by the effects of the information stream. Look at Prof. Davenport calling for much needed deliberation that is required for effective decision making here.

So what do we conclude? I suspect there is no easy conclusion here... on the one hand lie the undeniable usefulness of connected technologies and the inescapable convergence of content and devices driven by market economics; on the other hand accumulates the increasing evidence that all the content and devices of the world may prompt us to keep splashing around the shallows, rather than venturing into the deep, contemplative sea of human thought.

The jury is out on this and we will learn much more in the next couple of decades but consider, as we consume our well-marketed “experiences”, this point made by Greenfield in her book: “When you play a computer game to rescue the princess, it is the experience that counts: you don’t care about the feelings or thoughts of the heroine; when you read a book, the princess’s welfare and fate is the whole point”.

As in the game, so also in life, we enjoy the sensory rush of the experiences and our neurons spark exultant, from the temporary thrill of the latest Facebook update, tweet and headline... but then again what do we remember, recall, learn and produce?

Other information sources used for this article:

PS: The irony of using multiple hyperlinks and internet references in a blog to critique all things internety doth strike a bit late, doesn't it ;-)