Randy Kroszner On The Financial Crisis 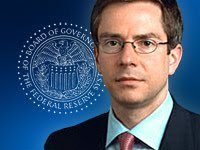 I attended a lecture yesterday at the Chicago Booth London campus by Randall Kroszner, former member of the Board of Governors of the Fed Reserve. Randy is the Norman R. Bobins Professor of Economics at Chicago Booth and he spoke about his experiences during the financial crisis and his analysis of the causes and remedies. His talk will be up as a podcast/vidcast soon and I will share the link when it is up, but I found some of the Q&A (details below) especially fascinating:

Q. A Chicago alum now working with the FSA brought up the topic of issue of executive compensation in the financial services industry.

A. Kroszner's take was that the renewed attention to the issue is welcome but it might be a bit misfocused.

Randy's conclusion was that while there is definitely a problem in the risk-reward alignment and while it is a popular perception that bankers are overpaid, the issue is a lot more nuanced and interconnected with systemic issues it appears to be.

Q. Can the West spend its way out of the recession?

A. "If something cannot go on forever, it will stop" - Herbert Stein. Randy made the case for a difference between spending that becomes a multiplier and spending that's pointless. If the stimulus spending was to improve the state of infrastructure or to repair the high school education system in the US, then it makes sense to invest because the returns will be manifold. On the other hand, if stimulus investments are spent on "porkers", then you're probably digging yourself deeper into a hole... acc. to Randy, the %age of the current stimulus package being spent on what he called "useful long term investments" was not at all encouraging.

Q. How did you feel in the heat of the crises - how did you make decisions etc? Were you scared? (not my question!)

A. Yes, he said, there was a heightened awareness of the immense impact of each decision but rather than fear he said that this created a very acute focus on the issue at hand. He quoted a favorite book of mine, The Lords of Finance and how it opens with Montagu Norman, the then Governor of the Bank of England going on a long holiday because he was stressed out... almost in the middle of the Depression. Would Bernanke be able to do this today? ;-) He stated two issues that he thinks made the difference:

These points were fascinating - for me, they illuminated the importance of having an analytical framework or viewpoint when going into a crisis. At the same time, it also highlighted the importance of learning the right lessons from history and not missing the link between cause and effect.

Thoroughly fascinating descriptions but I was a bit disappointed that there were no specific prescriptive stances that Randy took... especially with regard to executive compensation or bank regulation. Yes, the issues are very complex and sophisticated but it would have been great to hear him a stake on the ground with rules or assumptions that could form the basis of any future decisions.

Why won't America be realistic?

I attended an interesting LSE Ideas discussion/book launch about how America refuses to be realistic. It was chaired by Prof.Michale Cox of the LSE whose student was the author: Dr. Adam Quinn, a lecturer of International Politics at U of Birmingham.

Naive in politicalese, I saw the title "Why won’t America be realistic" and thought oh, here we go, one more round of US-bashing by Les Europiennes... I was quite wrong and in fact enjoyed the entire chat.

Suspecting that there were some of us who didn't know anything about political philosophy and the like, Dr.Quinn started by defining Realism: states competing against each other for scarce resources and acting to further their national interests. This effectively means that countries act with a worldview that considers the world as it is as opposed to how an ideal world should be. Advocates of this school included Kissinger and Morgenthau. He went on to state that the venerable #42 aka W. was obviously not realist but Quinn says that it wasn’t just about him... the country itself has been constrained right from its founding days by a strong ideology that pushes it away from realism.

When it all started, America was a weak confederation of states, unable to project power and too weak to dabble in European affairs - so it tended to itself, with its civil wars and expansion into the wild wild West and the civil wars. – its geographic isolation bolstered this political school of thought.

In the 20th century, one would have expected this stance to change - but even though its economic and moral interests drove American engagement with the world, Quinn says that the domestic political culture did not change. After WW1 and WW2, as European boundaries were redrawn, America decided not to join the old world order but rather tried to create one of its own. With Wilson came the position that there was a distinction between the government of a country and the people; the Cold War was essentially about Wilsonian aims and Rooseveltian force. Such an ideological basis dictates that America intervenes in Zimbabwae or Rwanda even if realism would suggest that it shouldn't.

So far, so good... but when Quinn sat down, Dr.Tim Lynch argued that this was a very subjective view - for example, Haiti or Iraq would probably have been better places if America had intervened more often. He quoted the example of Bosnia to suggest that American intervention meant more order and more stability. A very interesting example he gave was the NHS, which was set up with American funding - what do you know! ;-)

Lynch also took issue with Quinn's assertion about America not being realist during the Civil wars - he believes that the diplomatic efforts of McPherson & Lincoln were far more realist than anybody knew then. And his principal counter-argument example was that of the Cold War - by persisting with its ideology and not with realism, America won it. In a world where China is tightening its grip on African commodities and the Russians are laying siege to Arctic oil, he argued that it might be better for America to shed its ideological cloak and embrace realism fully.

A bunch of very interesting points to which Quinn obviously didn’t agree - you can check out the podcast here and the book is available for a whopping £71 at Amazon.

My superstar question for Quinn was about how America could be so decidedly realistic in asserting its economic power - was that something he had considered? But somebody else beat me to it and his answer was that his thesis did not consider the realm of economic policy - rightly so, because thats an entire theory in itself but how in the context of the question, how separate is foreign policy and economic policy, really?

With red wine, crackers and some interesting flashes of argument, deciding to attend these LSE Ideas sessions is turning out to be a good idea.