When we understand this slide... 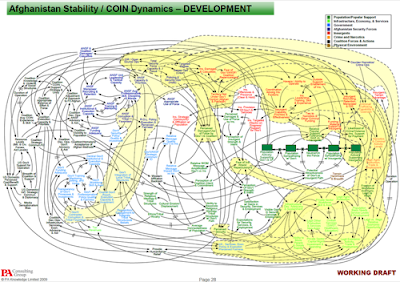 THE MAN, THE MESSAGE, THE MEDIUM Earlier this week, I attended a presentation by a very senior manager in my company; the man by himself was inspiring, what he had to say was interesting and his body language was down-to-earth and honest... but his Power-point slides were a different matter altogether. Somebody had created a complex structure which weaved back & forth, interspersed with slides carrying 13 double-lined sentences or bullets with sub-bullets which had further nested text – whoa, what was happening here?!

Sure enough, as we progressed through the slides, (IMHO), the presenter found it increasingly difficult to explain each and every one of those points. In many cases, he skipped over some points, while in others he laboured his way through each and every one, trying very hard to fit all of them into the context of what he was explaining. It would be easy blame this on the creator of this specific deck or on the complexities of the business we operate in or maybe even label it as a cultural artefact of a tech-co… but I believe that something else ails us all – the medium of Powerpoint.

Well, here’s the gist of what he says:

MY PERSONAL TAKE My take on this stems from personal experience at the University of Chicago; I worked with two outstanding professors, with Sanjay Dhar as a Teaching Assistant and with Mathew Bothner as a student. These professors insisted that for every assignment, all they wanted was a 1 page submission. This not only forced us to put content over gimmicky templates/animation but also helped us cut out the chaff and prioritize the most important arguments that would lead to a convincing conclusion. Some of these cases required sophisticated financial calculations, information from interviews with stakeholders and consideration of complex regulatory issues… but at the end of it, the final decision would be summarized in the famous 1 page memo.

What do you think? How have your experiences with Powerpoint been? I would be particularly interested in hearing from people who were used to memos and now handle PPT. Let me know.